What is the anterior cruciate ligament? 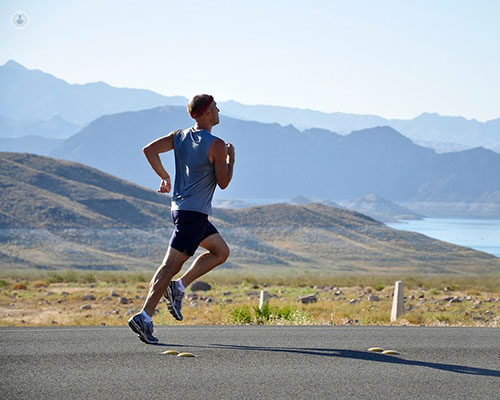 Function of the anterior cruciate ligament

It is, therefore, the most important element in preventing anterior displacement of the tibia, by limiting tibia rotation and internal and external angulation of the knee when stretched.

Pathologies of the cruciate ligament

The cruciate ligament is the most frequently injured of all ligaments. Any sudden change in the direction of the knee, or sudden stops, can cause injury. As a result, it is a common sports injury. In fact, two-thirds of anterior cruciate ligament injuries are sports-related, with young people being the most affected. Some examples include: landing awkwardly on the leg after a jump or stopping abruptly when running.

These injuries occur more frequently in women since their anatomical characteristics are different to those of men: women have greater joint laxity, a wider pelvis that influences the external rotation of the tibia and a smaller patellofemoral groove (where the anterior cruciate ligament is located in the knee).

One of the more serious injuries is rupture of the anterior cruciate ligament, which can cause instability in the knee and give the sensation of it not being able to support your weight, swelling of the joint, difficulty in supporting the leg or limited bending and stretching of the leg. There may also be achronic anterior cruciate ligament deficiency as a result of a previous tear or elongation or stretching caused by a previous trauma to the knee.

When these injuries occur, whether rupture or chronic deficiency, they allow abnormal rotation and translation of the tibia. As a result, running and walking can damage the meniscus and cartilage. Osteoarthritis will develop if the bones and cartilage rub together without protection, resulting in pain and an inability to walk.

An anterior cruciate ligament injury cannot heal on its own. The orthopaedic surgeon will decide whether or not surgery is necessary. Non-surgical treatment is usually recommended if:

Non-surgical treatment involves prolonged rehabilitation in order to strengthen the muscles of the quadriceps and hamstrings. A knee brace will also be needed for some sports activities or for walking. You may also need to change the type of sports you do as well as the level and intensity of the sports activities.

If these treatments are not suitable for you or your type of injury, then surgery will be recommended, which will enable the full recovery of the joint. Thus, people with a recent ligament tear and an active lifestyle, those with chronic ligament deficiency that destabilises the knee (damaging the meniscus and cartilage), and people with an anterior cruciate ligament tear who practice impact sports may be candidates for anterior cruciate ligament surgery. If they do not have surgery, they may be unable to return to their sporting activity due to the instability of the knee and possible associated injuries to the meniscus, ligaments or cartilage.

Anterior cruciate ligament surgery is usually performed using arthroscopy. This allows the injury to be approached through two or three incisions of less than 1 cm. The damaged ligament is removed, so it needs to be replaced with a graft. This graft will come from your own body, from the injured knee. The graft is inserted through a tunnel made in the tibia and the femur. The graft will heal to the bone tunnel several weeks after implantation, so the graft must first be fixed to it. This can be done using titanium screws (at the ends of the graft) or bioabsorbable screws, among others. The specialist will immobilise the knee after the operation. The next day you will be able to move the joint gradually. You are then ready to start rehabilitation sessions with a physiotherapist in order to restore mobility.

Any cookies that may not be particularly necessary for the website to function and is used specifically to collect user personal data via analytics, ads, other embedded contents are termed as non-necessary cookies. It is mandatory to procure user consent prior to running these cookies on your website.